Be Still And Know That I Am God 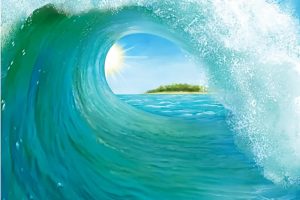 There are times I feel like chicken little, when an acorn to falls on my head and I think the sky is falling. Over reacting and panicking when there is little to be afraid of. Then there are times when we face great disaster with dire consequences where it would not be possible to over react to the impending doom that hangs over us, restrained only by the thinnest of threads.  In both cases the Christian response  should be the same.

Each Christian should hold fast to the reality that it is God that is is in control of our life, and orders its days and outcome. He is God, and his way is supreme.   It doesn’t matter the evil man has planned, God will surely turn it for the good of his people. Though for a time we might endure a trial to get there.

We know that joseph grew up in the favor of his father Jacob who delighted in him. He was adorned with a special coat of many colors, surely his life was blessed. Until one day his brothers fell upon him and took it all away and sold him into slavery. Abandoned by his family and fallen from the favor of his father, Joseph was bereft and alone, but what was his response?

As Joseph tells his brothers: (Gen 50: 20) But as for you, you meant evil against me; but God meant it for good, in order to bring it about as it is this day, to save many people alive.

Today our country faces what seems to be disaster as the people who would like to destroy God and his morality seem to be taking power…but never forget, God is in control, and he is taking the long view. so what should be our response when we face and see the trial that is coming?

God has it all in his hands, and if we face a season of suffering, it will bring a bountiful harvest of blessings.  Trust God, rejoice in Him and His promises to us and let not your heart be troubled.

God is our refuge and strength,
A[a] very present help in trouble.
2 Therefore we will not fear,
Even though the earth be removed,
And though the mountains be carried into the [b]midst of the sea;
3 Though its waters roar and be troubled,
Though the mountains shake with its swelling. Selah

4 There is a river whose streams shall make glad the city of God,
The holy place of the [c]tabernacle of the Most High.
5 God is in the midst of her, she shall not be [d]moved;
God shall help her, just [e]at the break of dawn.
6 The nations raged, the kingdoms were moved;
He uttered His voice, the earth melted.

7 The Lord of hosts is with us;
The God of Jacob is our refuge. Selah

8 Come, behold the works of the Lord,
Who has made desolations in the earth.
9 He makes wars cease to the end of the earth;
He breaks the bow and cuts the spear in two;
He burns the chariot in the fire.

11 The Lord of hosts is with us;
The God of Jacob is our refuge. Selah