The Agony Of Defeat 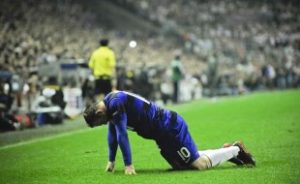 Every Saturday afternoon when I was a kid, after chores were done the men folk of the household would sit down and watch the “Wide World of Sports” on television. There was, in the intro of that show, a line that noted ‘The thrill of victory and the agony of defeat” The agony of defeat is something happens to all of us. The Holy and The Humble (which are the same thing, but that’s another message.), From the Apostle to the new born Christian ….we all, at some point, fail. We all at some point in our life come to a point where we slip, fall, or toboggan back down the hill we are trying to climb. It can be in a big way, or it can be in a little steps. Sometimes we might even feel like we are in the Olympic event of the 1000m backslide. While, we all make mistakes, missteps or huge errors, it’s not that we make them that determines our eventual victory, but rather how we react to them.

Not too long ago my wife and I took a trip to Death Valley national park here in California. At Death Valley there is a crater with the unusual name called Ubeheebee Crater. This crater has steep walls with loose gravel 3 feet deep all around. After some discussion it was decided that my wife would stay at the top and I would venture the 300 feet down to the bottom of this thing. Going down the crater was a breeze. With each step I traveled a good six feet and landed in the cushion of loose gravel. I got down to the bottom in less then a minute. After looking around for a while I realized again why my wife is the wise one in the group. Climbing up this crater wall was horrific. You would scramble up four steps and slide back three. Every step I took meant sinking my foot into twelve inches of gravel and pulling it out again. By the time I got half way up that 300 foot embankment I had taken a mile worth of steps up that steep hill and I was exhausted. After about fifteen minutes I was worried my wife wouldn’t know what was happening and I was still only halfway up the hill. I was defeated but I couldn’t stop, I just kept thinking to myself that I had to get to the top and even if I slid back three steps I was always making at least one step of progress. About a half hour after I began I made it to the top, drenched in sweat and five pounds lighter where I met my worried wife. She let me know she saw about twenty other people come by, look down to the bottom and shake their heads, apparently having better sense than me. After that trip, I renamed that crater “U Be Heaving” Crater.
I am sure you can see where I am going with this. While I had to eat some crow I had a victory getting out of that crater, not because of the three steps back I slid (3 failures) but because of the one net step that I gained. The only true failure that day would have been for me to stop trying. (Imagine the rangers having to haul my sorry self out of that hole)
So to, is it in our spiritual lives when we fail….it is not a reason to quit, but to keep going. The Apostle Peter always gives me hope in these kinds of situations. He was impulsive with his faith, jumping out before he was really prepared and suffering set back for it.
Matthew 14: 25 Now in the fourth watch of the night Jesus went to them, walking on the sea. 26 And when the disciples saw Him walking on the sea, they were troubled, saying, “It is a ghost!” And they cried out for fear.
27 But immediately Jesus spoke to them, saying, “Be of good cheer! It is I; do not be afraid.”
28 And Peter answered Him and said, “Lord, if it is You, command me to come to You on the water.”
29 So He said, “Come.” And when Peter had come down out of the boat, he walked on the water to go to Jesus. 30 But when he saw that the wind was boisterous,[b] he was afraid; and beginning to sink he cried out, saying, “Lord, save me!”
31 And immediately Jesus stretched out His hand and caught him, and said to him, “O you of little faith, why did you doubt?” 32 And when they got into the boat, the wind ceased.
33 Then those who were in the boat came and[c] worshiped Him, saying, “Truly You are the Son of God.”

Peter had his eyes on Jesus; He was focused on Jesus and heard the words of the Lord. And he jumped out in accordance to those words and began to walk in incredible faith. Then Peter took his eyes of Jesus and immediately began to be moved by what was happening around him, his faith faltered and he went into the water. What was Jesus’ response to his failure? Did Jesus let Peter drown for being a failure? No, Jesus grabbed Peter in his failure and saved him, and he also chastised him. This chastisement didn’t come because Jesus was mad or impatient with Peter, but because He cared for Peter, Jesus wanted Peter to learn how to walk in that exceptional faith. There were other failures in Peter’s walk and yet Jesus never got tired of him, Jesus never told Peter “Go back to your fish, you can’t handle this”. Even in Peter’s biggest failure, the denial of Christ three times, Jesus did not condemn Peter; he brought Peter back into right standing and gave him a job to do.
The only failure you will ever suffer from is the last failure, the one you don’t come back from. Will Jesus condemn you if you continue to fail? No! As Romans 8 tells us:
Romans 8:1 There is therefore now no condemnation to those who are in Christ Jesus,[a] who do not walk according to the flesh, but according to the Spirit.
Will Jesus ever reject you for your failure? No! Has Hebrews 13 tells us
Hebrews 13:5 For He Himself has said, “I will never leave you nor forsake you.”
Will God ever chastise you for messing up? You better hope so…. Hebrews 12 tells us
Hebrews 12: 6 6 For whom the LORD loves He chastens,
And he chastens you because He has great things in mind for you and wants you to walk in that incredible faith he has set before you.
So what happens if you back slide faster than an otter on a snow bank? Do you give up? Or do you fight back and get back to the top of the hill?
God will never tire of seeing you at square one, though he would love to see you advance and win the battle you are fighting so that you can be that person who is “Perfect , Complete and Lacking Nothing”
If you are hearing a voice in you, telling you that you are a loser and a failure and no good to God, and why would God still love you, you better turn around and tell that nasty old Satan to get the Hades out of here. Only that old devil, Satan, the accusers of the saints speaks those words to the ears of the believer trying to get them to lay down in defeat. (we’ll talk more of that in Wednesdays leaders Digest)
If you took four steps up that hill and slid back three, take heart, for you are closer than you have ever been to the kingdom of God. Never ever forget that God loves you, and His love never fails, ever. God will never lose patience with you, He will never reject you, He will never kick you to the curb, He will never give up on you.
Let me repeat, the only true failure is your last failure, the one you don’t get up from. If you do fail, don’t give up, get up.

1 John 1:9 If we confess our sins, He is faithful and just to forgive us our sins and to cleanse us from all unrighteousness.
Get up, get clean, don’t get down on yourself, and take the next step up the hill. Cause God loves you very much.