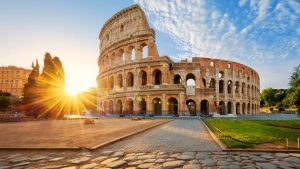 I am going to ATTEMPT to post a daily post on the book of romans, semi expository though I am not a “Teacher” but just to give my perspective on it.

Romans 1:1 Paul, a bondservant of Jesus Christ, called to be an apostle, separated to the gospel of God

In One sentence Paul identifies himself as humbled to serve Jesus Christ and elevated by Jesus Christ to be an apostle of God for the gospel of Jesus Christ. Echoing what both  Peter James and Jesus said.  If you want to see grace and be exalted, you must humble yourself. As exalted has Paul was he also went through more than most of us, suffering afflictions, beatings, imprisonment, shipwrecks and beheading all for the sake of the calling to be an apostle of the Lord**. So before you seek to be used greatly by God, count the cost.

2 which He promised before through His prophets in the Holy Scriptures,

From Genesis when it was told that Jesus would crush the head of Satan, through all the psalms and the prophets a messiah, a deliver was promised, and Paul was the one chose to take it to the Diaspora* and the world

3 concerning His Son Jesus Christ our Lord, who was born of the seed of David according to the flesh,

Paul establishing both the Sonship and the Messianic lineage of Christ, through David would be an important point to the Jews he was trying to reach.

4 and declared to be the Son of God with power according to the Spirit of holiness, by the resurrection from the dead.

As he later tells in this book (Romans 10) it is belief in the resurrection of Jesus Christ that saves. And the resurrection by the power of the Holy Spirit established the triune nature of God. It is important that Jesus did nothing in His own will and power. it was by the will of the father that he spoke and acted and the power by the Holy Spirit that he commanded demons and did miracles. This is why Jesus said that the Pharisees who said Jesus was casting out devils by satan were blaspheming the Holy Spirit***, and why He said “these things and greater will you do in my name because I go to my Father****”, because the same Spirit that indwelt Him indwells us.

5 Through Him we have received grace and apostleship for obedience to the faith among all nations for His name, 6 among whom you also are the called of Jesus Christ;

Save for this calling….this purpose the gospel may have never left Judea. I find the timing of the coming of Jesus to also be propitious. He came at the very height of the Roman empire, and through their governance and road building and protection the gospel spread through all of Asia minor, Greece and to Rome with no impediment and while Rome did unimaginable harm to Christians, it does bring proof to the fact of what Paul says in

Romans 8:28 And we know that all things work together for good to those who love God, to those who are the called according to His purpose.