Be Strong In The Lord 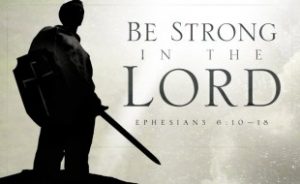 Now, more than ever it is time for us to stand and be counted….. Prayer warriors, wear out the rugs in your prayer closets, Bastions Of God’s Truth Stand Boldly In the Face of the Enemy, Foot soldier, do not shake in your Armor, because even if the whole world is arrayed against us we can Boldly declare as David did when facing Goliath ” Who is this uncircumcised philistine that he should stand against the army of God”
These are perilous times both for the lost and the saved, so many voices so many excuses…its time for Christians to come to the battle and stop giving up the field.
The battle ground is souls, the enemy, well he is the age old enemy and his unwitting victims who spread the lies , and accuse the saints for speaking the truth. They call us haters and seek to limit our speech and our actions, but we must be bolder than ever, louder then ever and uncompromisingly determined to promote the truth.
And everyone has a role.
Surely not everyone is built to stand up and take the hatred and vile evil spewed upon those who stand as bastions of truth, but you can support them with prayer.
It is time men and women of God to strap on the armor…..and take a stand. Ephesians 6:10 Finally, my brethren, be strong in the Lord and in the power of His might.11 Put on the whole armor of God, that you may be able to stand against the wiles of the devil. 12 For we do not wrestle against flesh and blood, but against principalities, against powers, against the rulers of the darkness of this age,[c] against spiritual hosts of wickedness in the heavenly places.13 Therefore take up the whole armor of God, that you may be able to withstand in the evil day, and having done all, to stand.

14 Stand therefore, having girded your waist with truth, having put on the breastplate of righteousness, 15 and having shod your feet with the preparation of the gospel of peace; 16 above all, taking the shield of faith with which you will be able to quench all the fiery darts of the wicked one.17 And take the helmet of salvation, and the sword of the Spirit, which is the word of God; 18 praying always with all prayer and supplication in the Spirit, being watchful to this end with all perseverance and supplication for all the saints

I will stand with you, my brothers and sister in Christ