Repent For The Kingdom Of God Is At Hand 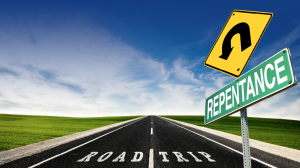 Prophets are a strange brew, and they always have been.

They are not the life of the party. They aren’t the guys dancing with the lampshade on his head, quite the opposite. They are often very quiet and when they do speak, it’s not always what people want to hear. Sometimes they can be the party poopers.

…..and there are quite a few more of them out there then you might expect.

They are the mice in the wainscoting staying in the shadows until called out by God. But they speak with the same Spirit and often the same message. And the message we are all hearing, and speaking with one voice these days is simple.

“Repent for the kingdom of God is at hand. Make straight the way of the Lord.”

The sin of man has become an offense to God. The pride, the self-idolatry and the rejection of God’s will and grace have planted a garden on this earth. A garden of sin whose stench has reached into heaven and has filled the nostrils of God.

God is poised to pour is wrath out on the world and time is not long.

He hold’s his hand solely for the just and those who would be just.  For there are many Christians who are dabbling and playing in the world, who, save that they repent, will also taste the bitter cup of wrath awaiting those who mock God.

The time for playing has come to an end. The time for half measures is over. Jesus is coming back for a Bride who is without spot or blemish. I am not sure if any of us could truly point at ourselves and claim that status, but hope remains.

Never has one word meant so much to the Christians of an age as Holiness means to us. The world has become voracious for sin and self-satisfaction. And the people of the world exalt themselves above the law of God, above the grace of God and even above the being of God.  None of these sins are new, they originate with the father of sin and lies himself. But what is different is the time.

In the days shortly after Pentecost the apostles thought that return of Christ was near. This has been case with each generation that has thought perhaps they were living in the end times. I will not presume to trespass upon the Lord’s prerogative of knowing the time of His return, but I do know what He has told me, and that is , that His wrath burns hot against the pride of man. Only for the sake of those who have called His name, yet remain in the world, and those who have yet to call and soon will , has he held his hand.

7But the heavens and the earth, which are, now preserved by the same word, are reserved for fire until the day of judgment and perdition of ungodly men.
8But, beloved, do not forget this one thing, that with the Lord one day is as a thousand years, and a thousand years as one day. 9The Lord is not slack concerning His promise, as some count slackness, but is longsuffering toward us, not willing that any should perish but that all should come to repentance.

Long was the wait for the apostles and yet, each of them in turn to come upon their last days. But the clarion call has sounded again as it did before the first coming of Christ. “Repent!, for the kingdom of God is at hand.”

As God came to Noah before his judgment came upon the earth in a flood, So God comes to us. What will our answer be?  Will we set about doing the will of God and preparing the ark (our very own hearts) that will ride as above the destruction of the world? Or will we delay in our efforts and waffle in our devotion and be caught with scuppers awash and be in travail when the torrent comes?

And the torrent comes

The story of Lot has a lot to say for us today. He was what the bible calls a righteous man in a bad place

6and turning the cities of Sodom and Gomorrah into ashes, condemned them to destruction, making them an example to those who afterward would live ungodly; 7and delivered righteous Lot, who was oppressed by the filthy conduct of the wicked 8(for that righteous man, dwelling among them, tormented his righteous soul from day to day by seeing and hearing their lawless deeds)-

Here is a man like many Christians today….loving God and yet living in the world. It is said that Lot sat in the gates of the city, this is a place were the prosperous and elders of the city sat. No mere by stander was our brother Lot.

1 Now the two angels came to Sodom in the evening, and Lot was sitting in the gate of Sodom. When Lot saw them, he rose to meet them, and he bowed himself with his face toward the ground.

Here we see our righteous man enmeshed in the world, the very cream of Sodom’s society sitting at the gate. When he see ‘s the angels and recognizes them for who they are and makes the appropriate gesture to them , even  if his heart is not necessarily in the right place. The hypocrisy of the righteous living with the world defined.

2And he said, “Here now, my lords, please turn in to your servant’s house and spend the night, and wash your feet; then you may rise early and go on your way.”
And they said, “No, but we will spend the night in the open square.”
3But he insisted strongly; so they turned in to him and entered his house. Then he made them a feast, and baked unleavened bread, and they ate.

Have you ever been in a position where you were ashamed of your life and you did not want some other person of God to see the mess that is in the streets of your heart? Well this was Lot, he knew Sodom to be a vile and unholy town and he did not want these two angels of God to see it. Perhaps his unwillingness was to spare the angels the sight. More likely, he was trying to keep his hidden sin, hidden from God’s representatives.

But God is not mocked.

We know the story as follows.  The angels where there to destroy Sodom and they came first to warn Lot and his family to get out of town because God’s judgment was coming. Of his family, of his sons, his sons in law, his daughters and his wife only four chose to heed the word of the Lord and leave. Sons, sons-laws and married daughters all stayed, all were given the chance to escape the wrath of God. Four did.

And even then we know of those four, one looked back. And the wrath of God came upon her.

God is going to judge the world again, soon by all reasoning. His wrath is going to fall again on the unjust….and those who dwell with the unjust. Will we continue to mess around with the world and it’s ways. Will we look back upon the pleasant temptations of the world? Or will we conquer by the faith God has given us.

Here in lies the hope.

That we can indeed be presented to Christ and spotless and blemish free, a bride fit for a King.

“Okay Chief…sounds good to me, but how? “Here is the goodness of God:

2Grace and peace be multiplied to you in the knowledge of God and of Jesus our Lord, 3as His divine power has given to us all things that pertain to life and godliness, through the knowledge of Him who called us by glory and virtue, 4by which have been given to us exceedingly great and precious promises, that through these you may be partakers of the divine nature, having escaped the corruption that is in the world through lust.

2Grace and peace be multiplied to you in the knowledge of God and of Jesus our Lord, 3as His divine power has given to us all things that pertain to life and godliness, through the knowledge of Him who called us by glory and virtue, 4by which have been given to us exceedingly great and precious promises, that through these you may be partakers of the divine nature, having escaped the corruption that is in the world through lust.

Hold the phone Chief, it sounds like your telling me that….what I need to be Holy, God has already given me….Yep and there is more…

3 Blessed be the God and Father of our Lord Jesus Christ, who according to His abundant mercy has begotten us again to a living hope through the resurrection of Jesus Christ from the dead, 4to an inheritance incorruptible and undefiled and that does not fade away, reserved in heaven for you, 5who are kept by the power of God through faith for salvation ready to be revealed in the last time.

3 Blessed be the God and Father of our Lord Jesus Christ, who according to His abundant mercy has begotten us again to a living hope through the resurrection of Jesus Christ from the dead, 4to an inheritance incorruptible and undefiled and that does not fade away, reserved in heaven for you, 5who are kept by the power of God through faith for salvation ready to be revealed in the last time.

Wait…. You mean that not only has He provided me what I need to be Holy…but HE will keep me saved?

So what’s the catch?

It is simply this.

27My sheep hear My voice, and I know them, and they follow Me. 28And I give them eternal life, and they shall never perish; neither shall anyone snatch them out of My hand.

The difference between a sheep and a goat is that sheep hear the word of God and obey. As long as you have a heart for God you are His sheep. If you heed his voice, if you follow his word, if you love Him and have made him TRULY your Lord then you are His, and you are safe. You WILL leave the world and it’s coming wrath behind. Because His sheep hear His voice

And if you’re wondering about all those spots and blemishes…

Now to Him who is able to keep you from stumbling,
And to present you faultless
Before the presence of His glory with exceeding joy,
25To God our Savior,
Who alone is wise,
Be glory and majesty,
Dominion and power
Both now and forever.
Amen.

9If we confess our sins, He is faithful and just to forgive us our sins and to cleanse us from all unrighteousness.

Cleansed from the spots and blemishes and made righteous again. Everything we need to be that spotless bride, He has provided and will make appear in our life, if we only follow Him. Follow the voice of the Lord. Get up when you fall down and turn your back on the desires and lusts of the world and you will safely be in the hand of the Lord

I pray that you will never lose hope in the Love of Our Almighty Father, and never lose touch of His hand. May the world be forever shadowed in your eyes and it’s temptations smell like rotten trash to you.  Keep yourself Holy little children. And God will keep you safely in hand.