Welcome To The Battle 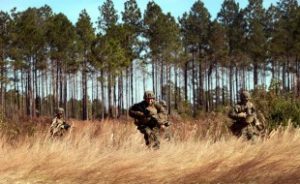 Life was empty when I was a sinner. Life was dry, life was ugly, and life was bereft of all the joy peace and fulfillment that I have in Jesus Christ. Life was also easier.

When I was a sinner, I didn’t have to think about anyone else, I set the rules, I made my own choices and if I was going to have a god…then He would be of my own creation. Sin didn’t mean anything to me.

Now I had a sense of right and wrong, and of proper and improper, and even moral and immoral; but those where like items on buffet, I could add them to my plate of ethics as I passed by, or I could leave them. I was in control. I was the big boss…..I was a mess.

Then one day I met Jesus, and the dryness of the desert was made into a garden. On the day I met Jesus, my life in Him became beautiful. And on the day that I met Jesus, my life became challenging. I was like a fish that had changed directions in a stream, and instead of slip streaming along in the world I was fighting against the current of it. I was in a battle. The good news was that I was not in the battle alone. I had the almighty God, the Creator of everything on my side and he was helping me, and helping me in a way that made me grow. He carried 95% of the battle and he let me carry 5%. This is his plan to help us grow.

The Fact of the Battle

The first and foremost thing we have to accept is that there is a battle raging within us. A battle of wanting to good, and wanting bad, of wanting to be holy, and wanting to sin, and of serving Christ and serving ourselves. Paul spoke of this battle many times in his writings to the churches

1 Timothy 6: 11But you, man of God, flee from all this, and pursue righteousness, godliness, faith, love, endurance and gentleness. 12Fight the good fight of the faith. Take hold of the eternal life to which you were called when you made your good confession in the presence of many witnesses.

Paul encouraged us to take the battle head on because it indeed was warfare.

2 Corinthians 10: 3 For though we walk in the flesh, we do not war according to the flesh. 4 For the weapons of our warfare are not carnal but mighty in God for pulling down strongholds, 5 casting down arguments and every high thing that exalts itself against the knowledge of God, bringing every thought into captivity to the obedience of Christ,

While the weapons of our warfare are not physical (carnal) they are mighty, and the war we are fighting is against a mighty enemy, but please don’t forget that we are only shouldering a small portion of the battle, we are carrying the flag…..the army is the Lord’s

So we are in a battle, but what kind of battle is it and where is the battle ground?
The battle is in you…in your soul, specifically your mind, will and emotions. Your soul is where you play out your daily lives, where you make the choices of what you will do in life and how you will react to it. It is the place where you have victory…or defeat, depending on what you do.

Man is a three part being, He is above all else a spirit, who has a soul and lives in a body. The body will always be corrupt. It is of this world, it wants things of this world and it usually wants it in excess. The spirit of a Christian is born of God, and will always be of God. It will want Godly things. Both of these parts of you have a voice. Each call to you to be served, the body for fleshly things and the body for spiritual things and the battle ground between the too, is your mind will and emotions. If you are to live a Christian life then your response is to be to say no to the flesh and yes to the Spirit. Paul puts it this way:

Romans 12: 1 I beseech you therefore, brethren, by the mercies of God, that you present your bodies a living sacrifice, holy, acceptable to God, which is your reasonable service.

There is no good to come from the body, the best you can do is put it on the altar and sacrifice it.

2 And do not be conformed to this world, but be transformed by the renewing of your mind, that you may prove what is that good and acceptable and perfect will of God.

The mind however takes a little more effort, and here once again is the battle ground, we must wrestle the mind away from the control of the flesh (which once had complete control of the mind) and turn it to the Spirit’s influence. You might notice that I seem to vary between capitalizing the word Spirit. I do this because the spirit of a Christian is intertwined with the Spirit of God, He indwells every Christian and it is through His power that we can even hope to overcome the flesh.
Paul restates this same idea in Ephesians:

Ephesians 4: 17
20 But you have not so learned Christ, 21 if indeed you have heard Him and have been taught by Him, as the truth is in Jesus: 22 that you put off, concerning your former conduct, the old man which grows corrupt according to the deceitful lusts, 23 and be renewed in the spirit of your mind, 24 and that you put on the new man which was created according to God, in true righteousness and holiness

The Purpose Of The Battle

So why do we have to face this battle? I mean if God can completely renew my spirit, couldn’t he throw in a soul cleaning for free? While to our minds this might seem to be the best way God has His purpose. James gives a glimpse into the purpose of the battle.

James 1:2 My brethren, count it all joy when you fall into various trials, 3 knowing that the testing of your faith produces patience. 4 But let patience have its perfect work, that you may be perfect and complete, lacking nothing.

James and Paul echo each other here, the purpose of the battle is to make us perfect complete and lacking nothing. There is an old saying that if you give a man a fish, you will feed him for a day. If you teach the same man how to fish, he will never be hungry. God, through the battle, allows us to overcome the tests and trials of the flesh that we might become mature Christians. God doesn’t will that any of us remain incapable, falling back to the starting line, each and every time. God wants us to face the battle so that if we take two steps forward, and through the testing we fall back one step, we have gained one step, and it is all ours. We have chiseled that truth, that success in faith, into the stone of our foundation and no one can ever take it away from us again. Gaining confidence in our ability to stand in faith for the Spirit and against the flesh is the purpose of the battle. It is why we are not stuck on a cloud somewhere insulated from everything. And please remember:

1 Corinthians 10:13
No temptation has overtaken you except such as is common to man; but God is faithful, who will not allow you to be tempted beyond what you are able, but with the temptation will also make the way of escape, that you may be able to bear it.
God has not sent you into battle alone; He carries all that you cannot.

Victory in the Battle

So then the ultimate victory in the battle is that we add, one at a time, these stones of truth to our foundation that we may become a servant of God, fit for His use, no longer struggling through life…but turning around what we have received and reaching out to others imparting words of life to them that they too may have what Peter calls “all things that pertain to life and godliness”.

2nd Peter 1:3 His divine power has given to us all things that pertain to life and godliness, through the knowledge of Him who called us by glory and virtue

So how do we gain this victory? By choosing do to what is right instead of wrong; by choosing to keep a peaceful heart instead and venting our frustrations; and finally by choosing to keep our mind on Christ, instead of the things. And by doing so, we transform our mind will and emotions. Becoming perfect, complete and lacking nothing is the victory that we are all seeking in Christ and simply taking control of our lives brings that to us.

Yes, it’s hard, it’s not called a battle and a fight for nothing, but it is not TOO hard. It is not beyond our capability to overcome, because Jesus is carrying the majority of the weight. It’s just something we need to do. And the final award, well that’s the best of all:

2nd Timothy 4:6 For I am already being poured out like a drink offering, and the time has come for my departure. 7I have fought the good fight, I have finished the race, I have kept the faith. 8Now there is in store for me the crown of righteousness, which the Lord, the righteous Judge, will award to me on that day—and not only to me, but also to all who have longed for his appearing.

It is up to decide, if the death Jesus gave us on the Cross, is worth the effort to run the race. I think we would all agree it is.

Next Week we take the battle to the Enemy